On Saturday, October 15, 2022, over 100 community members made it a priority to show support for the grassroots volunteer organization Rescue Reston and its mission of defending Reston’s recreational open space from unplanned development. Speakers at the event included:

Attendees commemorated 10 years of community action to ensure that Reston’s two golf courses (Reston National Golf Course and Hidden Creek Country Club) remain protected from residential or commercial development and remain as permanent recreational open space. All celebrated the three successful defenses of these properties against developer efforts to overturn the current land use designation as golf courses as stated in the Reston Comprehensive Plan. The clear takeaway is this: while we have won past battles, we remain in a fight against well-funded real estate developers who will continue in their efforts to try to defeat the decisive verdict of 98% of the community who oppose opening Reston’s Comprehensive Plan to consider a change to Reston National’s land use designation.

Rescue Reston’s President, Connie Hartke stated during her remarks, “Both golf course owners have spent a lot of money to manipulate us. The Reston National owners now threaten to close the course and take the County to court if they don’t get their way. They say that open space should be sacrificed for housing and retail. Look over your right shoulder [across Reston Parkway, a view of the Halley Rise development and Wegman’s signage and across the toll road one sees the Reston Town Center Metro station and tall RTC Next building]. That is coming, and it’s planned. There is a PLAN for Reston’s population to double, and it does not require taking one acre of Open Space. PROTECT RESTON’S OPEN SPACE.’’ Ms. Hartke also shared a discussion with Bob Simon, Reston’s founder, “In August 2015, I telephoned Bob Simon. I asked what he thought about the battle – it was Reston National only under attack at that time. His response: “The Reston National Golf Course area should remain as open space forever.”

Rescue Reston speakers reflected on how far we’ve come in the last 10 years. As Supervisor Alcorn said in his message, people “get it” now. From 2012 to 2015, we delivered on our mission to educate people on what speculative developers were attempting and why it mattered. This time, the community had much greater awareness of the past attempts, which helped Rescue Reston’s organized response campaign and communications with elected officials. People see how much development is planned for Reston, much of it already visible, with the cranes in the skies and the recently cleared trees along Reston Parkway that make the Halley Rise development so visible, just one example of the 30-plus million square feet of planned and/or in-progress Transit Station Area construction projects. Volunteers still went door knocking, but they came to us to ask for guidance rather than Rescue Reston asking for this action. Donations come in unsolicited, often right after an owner of Reston National speaks. The Reston community is so well-informed, and we will continue fighting against the efforts of those who want to develop this precious open space.

Community members were given a call to action during the event to volunteer to enhance the organization’s capabilities and continue our work together to amplify Rescue Reston’s efforts. The response was immediate and meaningful, with many new volunteer signups. We are also grateful for the numerous donations received during and after the event, further demonstrating that we are a united front, much stronger than when we started 10 years ago. Rescue Reston stands ready to continue the work with our supporters and elected officials to retain two vital features of Reston’s planned residential community that has the Biophilic City designation.

Rescue Reston supporters left the rally with the clear understanding that it’s not over but that there are golf course operators who would love to own Reston’s two successful, popular golf courses. The developers who bought golf courses in Reston need to recognize that it is time to exit. They bought golf courses, period.

About Rescue Reston
Rescue Reston is a grassroots community organization committed to defending Reston’s two golf courses that have land use designations of private recreation use, more specifically to remain as golf courses. Learn more at RescueReston.org. 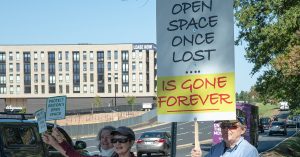 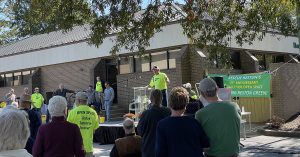 Rescue Reston Co-founder John Pinkman addresses the crowd during the 10th Anniversary Rally for Open Space. In the forefront is the audience with an attendee wearing a t-shirt stating “Open Space Today, Tomorrow, Forever” and in the background is a rally banner with a statement on Rescue Reston’s intent of “Keeping Reston Green!”