Rescue Reston in the News

Developers vs ‘Greenkeepers’ – While corporate and residential development has overtaken and overwhelmed many a struggling golf course, a grassroots group in Reston, Virginia, has withstood one attempted takeover of its beloved “green space,” and is set to again take on another attempted annexation.

Reston’s Green Recreational Open Space – Those who choose to use the golf course pay to do so while the rest do not have to pay — no county taxes and no RA dues.

On December 1, Rescue Reston’s Committee for the North Course and president Connie Hartke appeared on the community TV show Reston Impact to discuss the implications of new ownership at Hidden Creek Country Club.  Show will be aired on 12/10 at 8 pm, 12/20 at 8:30 pm and 12/24 at 8 pm on Reston Community Television, Comcast channel 28 and Verizon Channel 1981.  It is available anytime at youtu.be/8F9C4BzDouM.

Fairfax Board of Supervisors Member Catherine Hudgins issues a press release reminding developers that there is a very specific process required “…in order for development other than a golf course or open space to be considered for the property.”

Rescue Reston Honored As RCA Citizen of the Year

A Great RCA Evening Honoring Rescue Reston and its Supporters

Rescue Reston: ‘This Is a Very Positive Moment’ in Fight for Golf Course

Article in The Connection Newspapers

Article in The Connection Newspapers

Wednesday Morning Rundown- Golf For A Cause
More than 160 supporters of the grassroots organization Rescue Reston turned out Monday for a golf tournament, nature walk and dinner fundraiser at Reston National Golf Course.

Article in The Reston Connection

Article in The Connection

NO to Northwest Mutual

Read about Rescue Reston’s visual message to Northwest Mutual in the Connection.

Press Coverage of the January 21, 2015 Board of Zoning Appeals Hearing

Lots of Testimony, But No Golf Course Zoning Decision

Read the press coverage from Reston Now and the Fairfax Times of the Press Conference on January 7, 2015.

Supervisor Catherine M. Hudgins announces that RN Golf Management, LLC, also identified as Reston National Golf Course, has reactivated their appeal (A 2012-HM-020) and are requesting that a public hearing date before the Board of Zoning Appeals (BZA) be scheduled.

The appeal is of a determination made by the Fairfax County Zoning Administrator that any redevelopment of the property located at 11875 Sunrise Valley Drive and 2018 Soapstone Drive, Reston, VA., Tax Map reference: 17-4 ((11)) 4A, 26-2 ((2)) 8 and 26-2 ((5)) 4, for uses other than a golf course or open space would require an amendment to the Reston Master Plan, which is part of the Fairfax County Comprehensive Plan, approval of a Development Plan Amendment and approval of a PRC plan from the Board of Supervisors. Supervisor Hudgins continues to support the Fairfax County Zoning Administrator’s determination.

Under Virginia Code all appeals regarding Zoning Administrator interpretations are conducted by the BZA. The public hearing date has not been assigned and will be announced when scheduled.

Rescue Reston Board Members David Stroh and Connie Hartke were interviewed by John Lovaas, longtime Restonian and host/producer of the public affairs program RESTON IMPACT. It’s a worthwhile 28 minutes to share with anyone who isn’t clear on the possibility of residential development on our permanent open space and Northwestern Mutual’s involvement. It will first air at 8:30 p.m. on May 1st on Comcast Channel 28, or watch it anytime here.

Reston, VA, April 9, 2013 – Rescue Reston board members were disappointed, but not surprised, to learn that attorneys for the owners of the Reston National Golf Course, RN Golf Management LLC (of which Northwestern Mutual is the majority owner) once again have delayed their appeal hearing before the Fairfax County Board of Zoning Appeals.

Comments from Rescue Reston Executive Director David Stroh, “We presume that the owners recognize the weakness of their case attempting to oppose the County Zoning Administrator’s determination that the Reston National Golf Course is clearly zoned as permanent open space. What they hope to accomplish by yet another long delay of the hearing is unclear, but we are looking into our options with Rescue Reston’s attorneys Greehan, Taves, Pandak & Stoner, PLLC.

“The most important thing our community can do right now is to show the Board of Zoning Appeals and our County Supervisors where we stand and why. Together we can show them that we support the Zoning Administrator’s determination and the County’s long-standing Comprehensive Plan for Reston. We can stand together and show that we do not appreciate and will not stand quietly by when anyone attempts to destroy the open space that makes Reston unique — one of Money Magazine’s top 10 places in the country to live – even if they have deep pockets to fund their attack.

“The Rescue Reston May 5th rally/Spring Into Action fundraiser at Hidden Creek will go on! A strong showing of support will send a message to Northwestern Mutual. If the goal is to wear us down, then they do not understand what Reston is, who we are, and what we Restonians are made of.”

Rescue Reston Meets with Board of Supervisors Chairman Sharon Bulova

Board of Supervisors Chairman Bulova supports Rescue Reston’s position that there is no compelling reason to allow a change in zoning that would threaten the open space of Reston National Golf Course. Read the full Patch article.

Reston, VA, March 26, 2013 – After a brief respite due to RN Golf Management’s postponement of the Board of Zoning Appeals hearing from January to May, Rescue Reston is reemerging and ramping up its mission to alert Reston and other Fairfax County residents about the potential development of one of Reston’s primary green spaces.

The next community outreach event is our “Spring into Action” barbeque on Sunday, May 5, 2013 at Hidden Creek Country Club. This event is an opportunity for concerned citizens and neighbors to connect with each other and to help raise money for our legal defense efforts. There will be live music, a delicious menu, and a silent auction during the event. Additional information and a link to register online are available at Upcoming Events. The cost is a reasonable $65 per person, which includes payment to Hidden Creek Country Club for catering and their services and still helps to support Rescue Reston.

In addition to the rallying event at the Spring into Action BBQ, Rescue Reston is committed to getting as many people as possible to attend the Board of Zoning Appeals hearing on Wednesday, May 22, 2013 at 9:00am. A strong and unified citizen presence will help to make our community’s wishes known to the Board of Zoning Appeals and other elected officials in Fairfax County. Go to About Rescue Reston for details about the hearing.

The Rescue Reston Board of Directors also announces that it recently accepted the resignation of Executive Director John Pinkman, who stepped down from the board for health reasons. Mr. Pinkman will continue as an active volunteer for Rescue Reston.

In concert with John Pinkman’s resignation, the Board of Directors met on March 17, 2013 and named David Stroh as Executive Director/President. The Board also passed a resolution adding a fifth board position. The new Rescue Reston Board of Directors and their positions:

Kimberly Hartke, local blogger and advocate of sustainable organic farming, writes about the threat to Reston lakes and wildlife if RNGC is developed.

Check the article out on the Washington Examiner website…

Local Support by the Kids of the 13th Fairway

This is a great example of how local residents (in this case, kids) are showing their support in asking for the re-development to be stopped. Well done and thoughtful – well worth checking out.

Our first rally drew quite a crowd!

If you have not seen these videos yet, make sure you do. They are unbelievable!!

Lead Story Tonight on CBS Washington affiliate WUSA -Channel 9 We think this says it all. This now becomes very public. We are just beginning to mobilize resistance. We are not going Away!! Talk to your neighbors. Get them to join Rescue Reston – we are on the move!

Mr. Burns will continue to interface with the firm as Rescue Reston prepares to assist Fairfax County, Reston Association, and the Reston Community Association to prevent redevelopment of Reston National Golf Course into medium density housing (townhouses). The Board of Zoning Appeal will meet during day time business hours October 24 to consider an appeal from the owners of the Golf Course who “by right” believe they can redevelop the 166 acres of the golf course open space in Reston. The Fairfax County Zoning Administrator has ruled against the Golf Course owners, holding that any such redevelopment would require an amendment to the Fairfax County Comprehensive Plan.

During this period another attorney, Max Miller of Miller Law in Fairfax, supplied legal counsel and services to create the organization’s corporate identity. “Max was unbelievable. As his daughter lay in Fairfax Hospital with a serious and yet unknown intestinal trauma, Max worked through the weekend to create the corporate documents that enabled us to open a bank account and begin to receive legal defense fund donations,” Pinkman revealed. “Max knew the importance of this issue to the community and realized that time was of the essence,” concluded Pinkman. 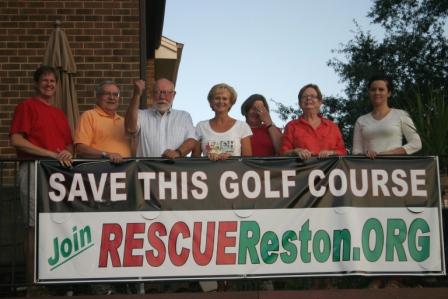 Rescue Reston, the newly formed action committee to oppose redevelopment of Reston National Golf Course into residential units, met in an executive committee session Sunday, August 19, and elected John Pinkman as its executive director. Pinkman had been heading up the organization’s communications responsibilities and will continue in that role. A Reston resident for 35 years, Pinkman has participated in a wide variety of community activities, but is best known for decades of work with youth baseball in a volunteer and professional capacity and the attempt to bring major league baseball to the region.

The primary work of the executive session was to establish criteria and candidates for legal counsel representation. Interviews will be held with firms this week.

Pinkman reported that although only up for a few days, the www.RescueReston.org website and Facebook pages are receiving significant public attention and “the organization is overjoyed that in such a short time hundreds of Reston residents are becoming involved. The website’s capability to accept contact information and donations to the legal defense fund from concerned residents will make participation much easier and enable the organization to stay in touch efficiently with everyone”, Pinkman said.

One week ago, only a handful of real estate interests knew about the proposed development. Now an entire community is energized. Rescue Reston has accepted the responsibility of communicating the rapidly evolving actions. A mission statement will be issued within days. “It is obvious from the emails we are receiving that residents want to be kept informed, but most of all they want action to preserve open space,” Pinkman said.

Rescue Reston continues to receive ongoing support from those not only contiguous to the golf course but other concerned residents across the community.